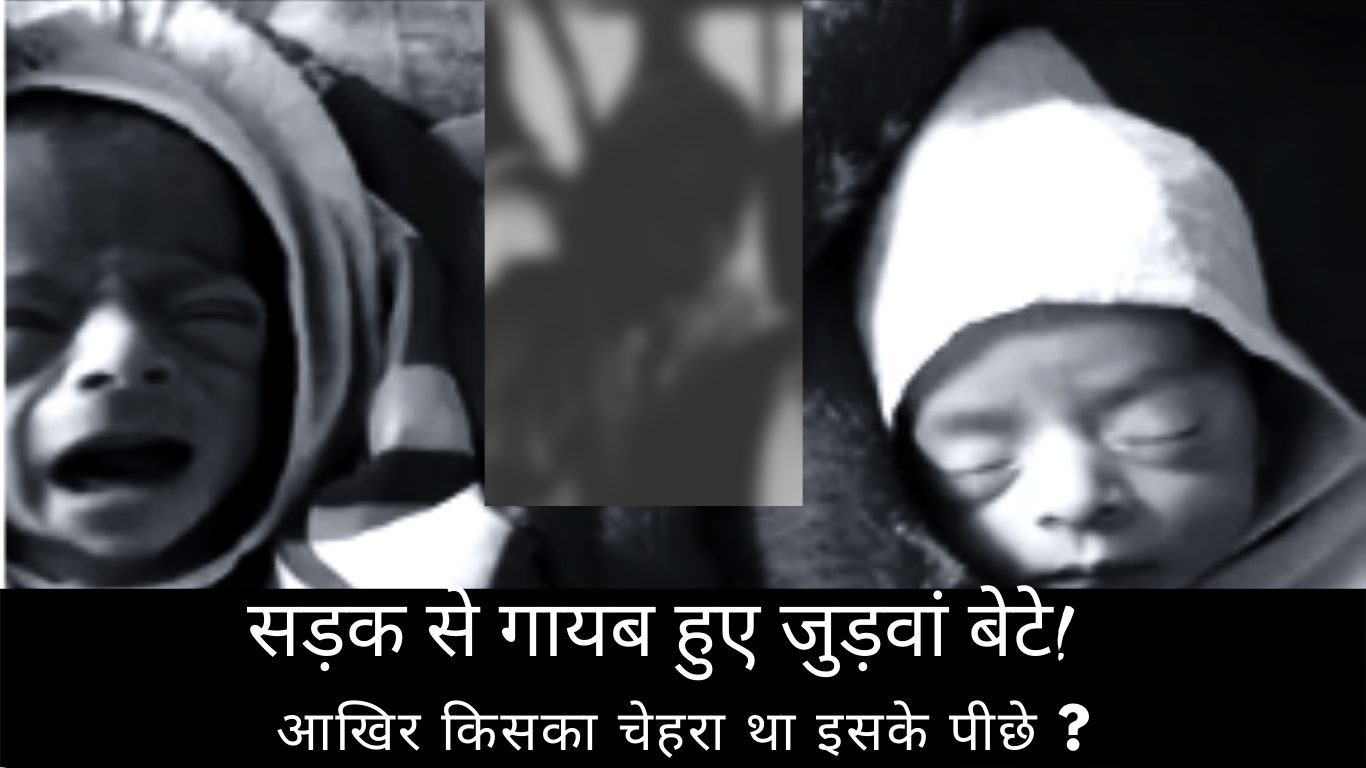 Twin babies disappeared from road. what was the truth? 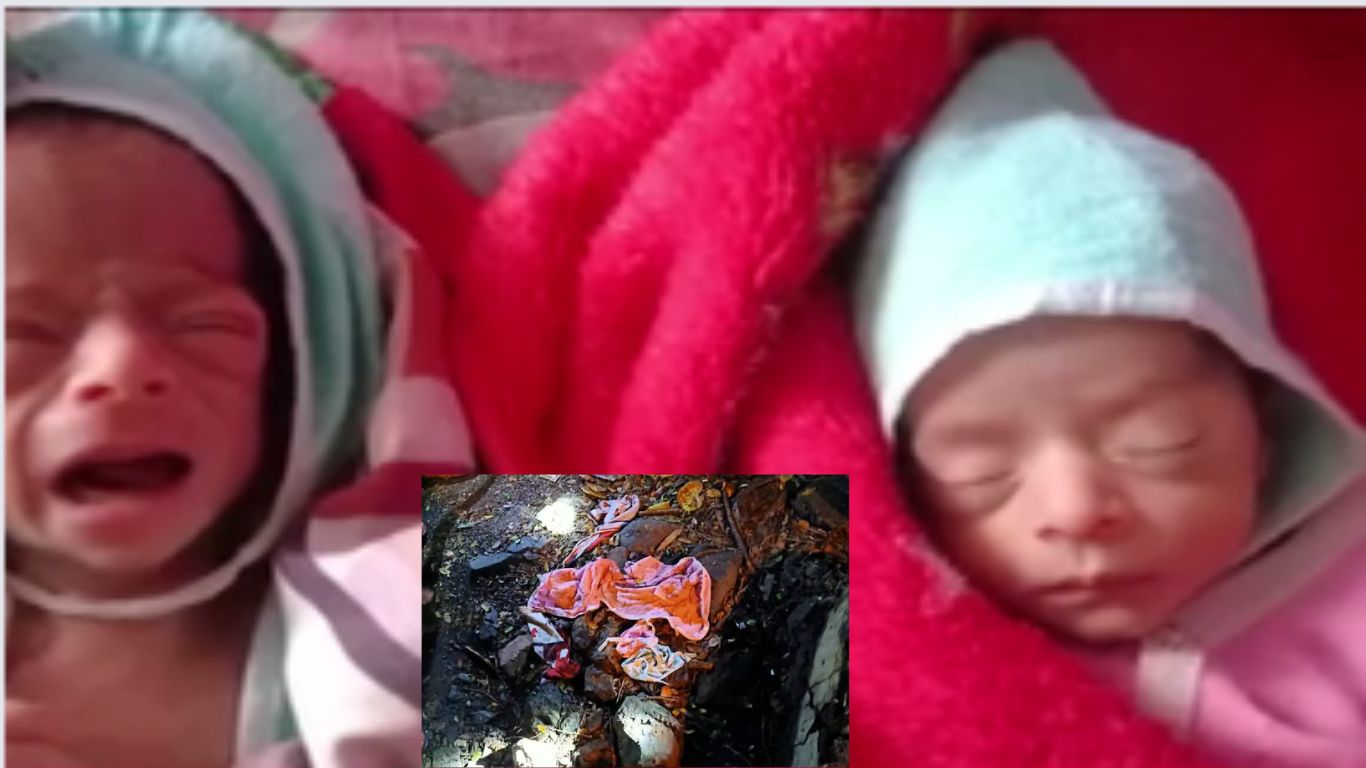 Who strangulated the babies?

Did Poverty and taunts of family turn this mother into a criminal?

The mystery surrounding the disappearance of twin babies in Bhopal was solved by the TT Nagar Police, on Tuesday. The mother allegedly strangled the 16-day-old infants. before leaving their remains in some bushes close to the city’s Habibganj police station, according to the police. The woman has been arrested and sent to jail.

As her husband is unemployed and an alcoholic, the accused, Sapna Dhakad, expressed her concern that the family would be unable to provide for two babies. The couple also has a three-year-old daughter to care for. 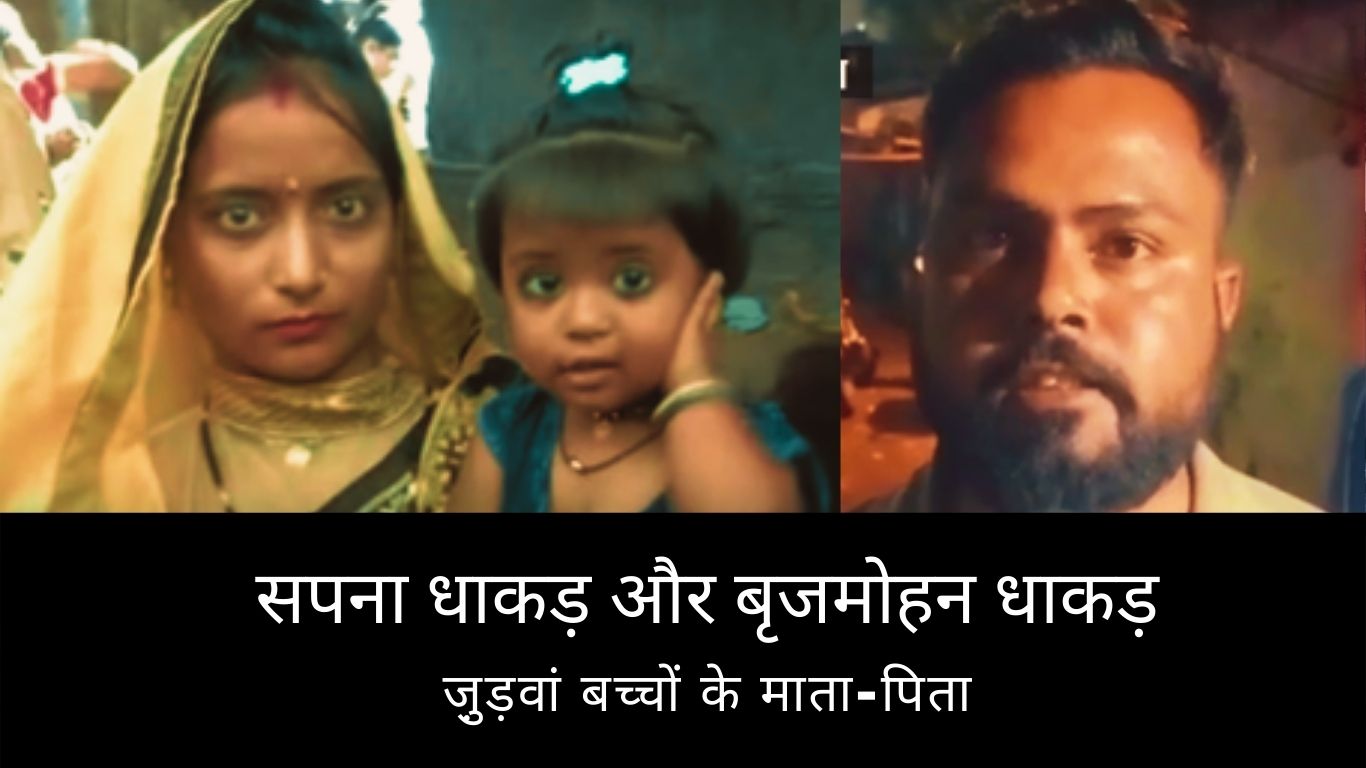 After a disagreement with her husband and in-laws (mother-in-law) on September 23, Sapna left her home with her twin babies to travel to her parents’ residence in Berasia, according to the initial police complaint. She claimed to have arrived at Rang Mahal Square, where she placed the infants on the ground to use the restroom. When she returned, she did not found her babies there.

Around 8.30 am, she received a call from her husband. She told him about the missing babies, after which they filed an FIR with the TT Nagar police. According to TOI, the police opened an inquiry into the alleged kidnapping and filed a report.

The police combed through over 250 CCTV cameras, searched nullahs and drains, flipped over garbage cans, and peered inside parked automobiles.

The police discovered CCTV footage from Rang Mahal Square during their inquiry, which showed the mother getting off a bus but without the babies. She was transporting her sons to Habib Ganj, according to the police’s examination of all the CCTV cameras along the path from her residence in the Kolar Guest House neighborhood to TT Nagar. However, they discovered video showing the mother throwing the baby’s clothes while she was close to the Old Habibganj Police Station, according to ACP (TT Nagar) Chandra Shekhar Pandey.

The woman misled the police

Sapna claimed to be “possessed” when police started looking into this aspect of the incident using CCTV footage. Police chose to use detective work to solve the case rather than pressuring her. The woman’s parents took her to an occult practitioner in Berasia to get rid of the bad spirit. Police discovered that her condition had gotten worse when she returned from Berasia on Sunday. She was admitted and later discharged from the JP hospital on Monday. 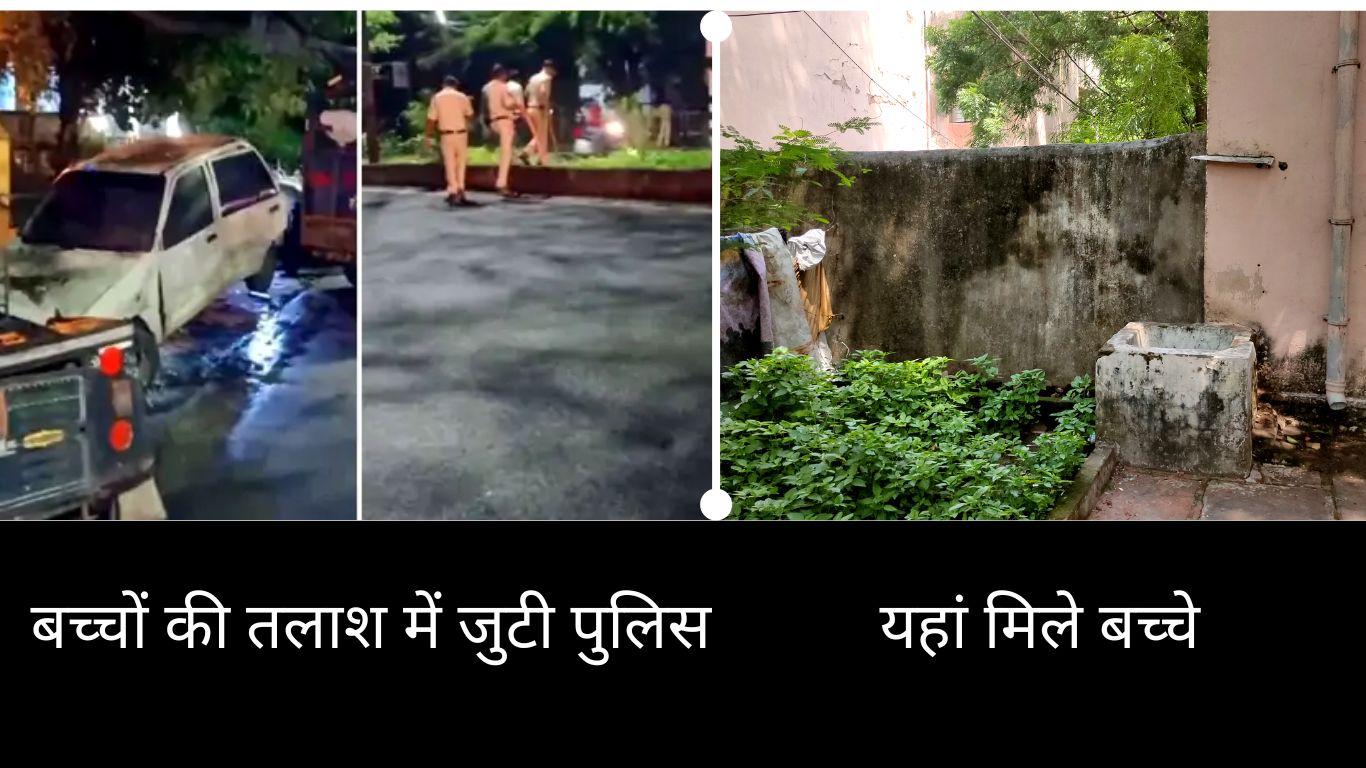 And the case solved…

“On Tuesday, on her husband’s call, police brought the woman to the police station. SHO Chain Singh Raghuvanshi started chatting with her about her village, saying that her sarpanch was his school batch mate. Then he asked her about the twin babies. The woman had started trusting the SHO. She made SHO Raghuvanshi swear thrice, placing his hand on her head and after getting assurance from him that he would not frame her she revealed to him that she had killed the babies. Later, she even took the police to the spot where she threw the dead bodies of the babies. The case was solved,” ACP Pandey said. SHO Raghuvanshi said he had not slept properly for three days as the case haunted him. 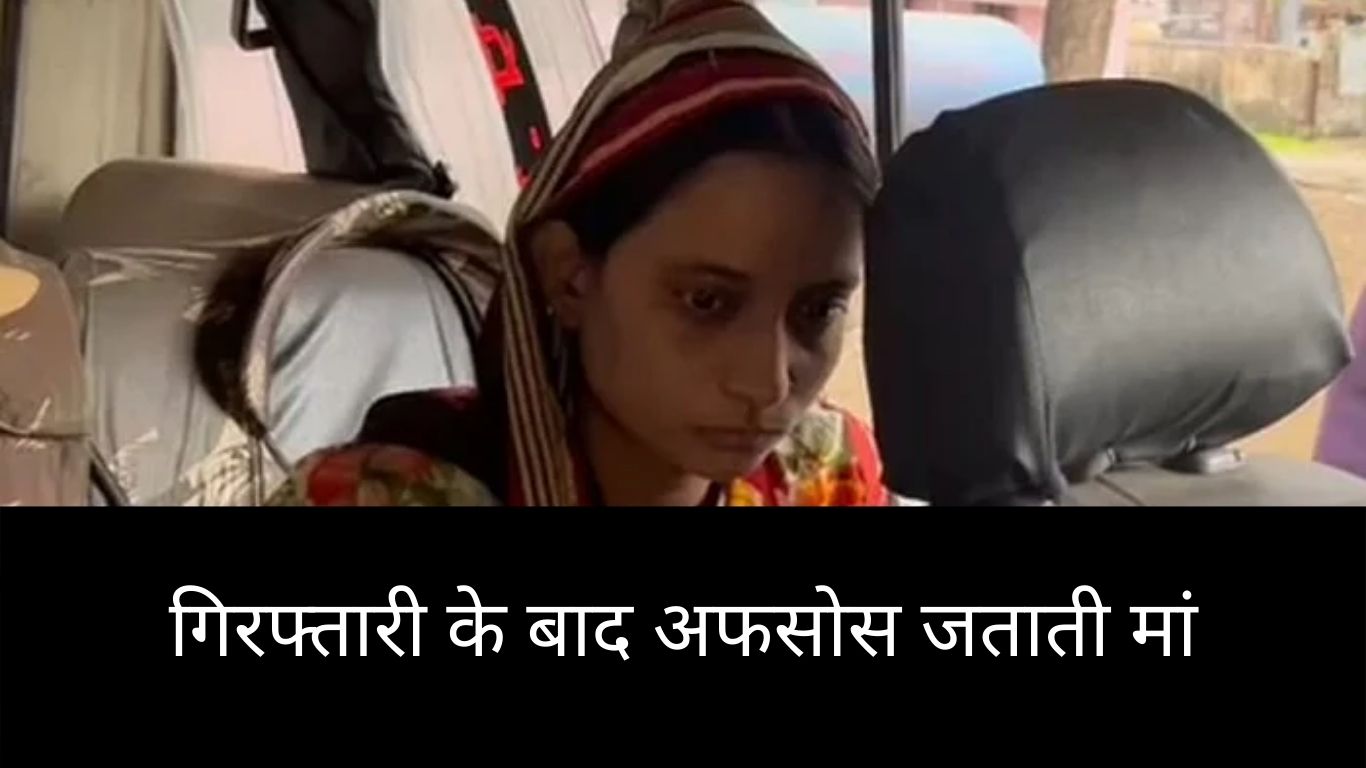 The reason for her cruel actions

Sapna, aged 27, confessed that she killed her twin babies out of concern that her family wouldn’t be able to provide for them. She explained to the police that her husband hasn’t had regular work in six months. Her in-laws have been making fun of her by wondering how the pair would care for the twins when they aren’t even financially secure enough to look after their first child. The woman’s husband’s older brother and wife are taking care of the woman’s first child. She claimed that even her husband would make fun of her about the matter. 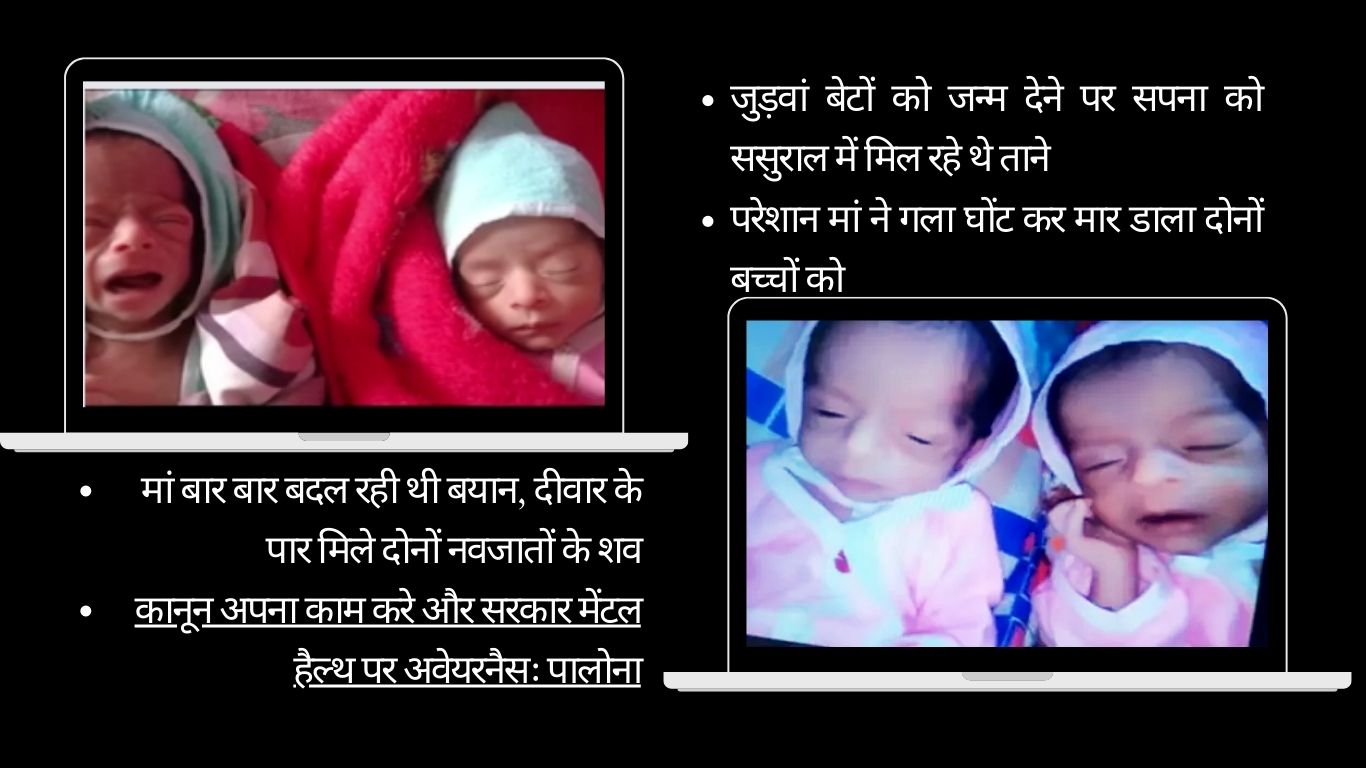 The woman’s father speaks out

Sapna’s father, Gulab Singh, claims that his son-in-law, Brijmohan Dhakad, murdered the twins, because he was unable to give Rs. 5 lakhs to him as dowry.

“Even Brijmohan twisted the arms of Sapna, threatening to kill the children if she did not bring the money from her parents. She told the story, and we were helpless. My son-in-law Brijmohan killed the twin babies and forced Sapna to dump their bodies. The Police have arrested the wrong person in this case”, he added.

Brijmohan Dhakar, talking to Free Press said, “We have BPL ration card for which we get sufficient grains. We do not have any scarcity. We are three brothers. So, there are no financial constraints. The allegation that we have demanded Rs 5 lakh is baseless. Even after marriage, we have not demanded a single paisa. We are also in a state of shock that how can a woman kill her own newborn twin sons.”

It is possible that the woman must be going through post-partum depression, as she had given birth to the twins just 15 days ago, before she murdered them. This goes to prove how not addressing mental health issues can lead a person to commit such heinous crimes. Even the smallest of things can trigger negative consequences. 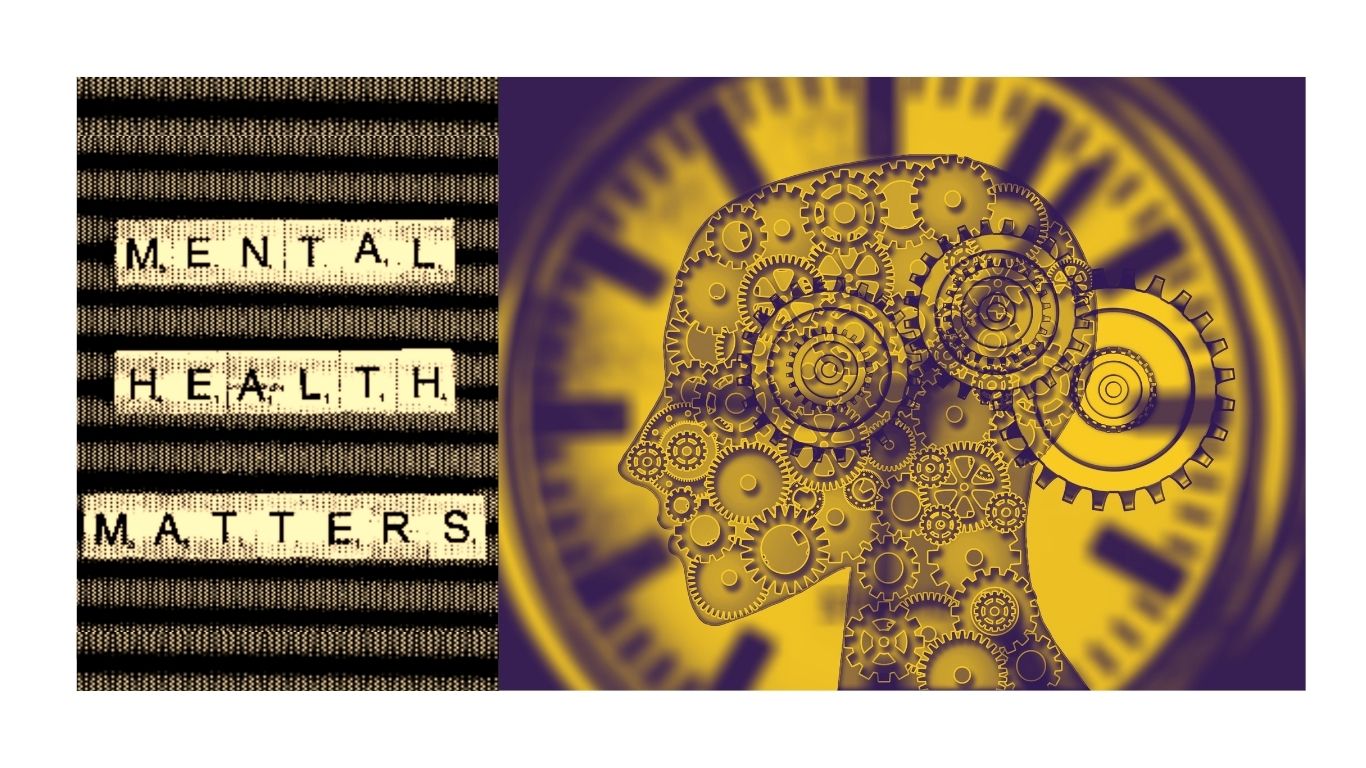 But we cannot deny the truth that Sapna brutally murdered her twin babies, whatsoever her mental condition was. She’ll has to face the ordeal.

And so, we appeal to the pregnant ladies and new moms and their close relatives to be spectacular for their mental condition. If any change is found in their behavior or response, immediately contact a psychiatrist.

We also appeal to the concerned authorities and ministries to take infanticide seriously. It is imperative that surveys and research be practiced preventing such acts from occurring in the future.